Note: I rambled a lot about the plotlines in this journal, which means there are censors all over the place and it might seem a bit badly written.

Last session the players got their hands on a house. So for this session I had prepped it. First of all though Ravion's player amazed me by bringing a A0 sized map of Brindenford for us to make notes on. What is where and the like. (Check the picture, it's awesome) We also discussed blowing it up to even bigger. The map is normally one inch is 500ft, so that would mean we'd have to upscale 100 from the normal picture to have one inch be 5ft for gridplay.

Fun detail: As we were recapping the previous session the players suddenly connected the 'don't go to sleep' and 'don't drink the water' with the name 'font of dreams', they are now paranoid about the water and about sleeping on level 2. They actually want to warn Barbuckle as well.
( Collapse )

[I really have to plug my players. They printed this big map of Brindenford. Dedication.]

As we last left out group of intrepid adventurers they had just beaten Wiel, the gnoll ranger. They lugged some of the armor and weapons back upstairs this session and rested up in the 'pedestal room', which they could lock.

Then they went on 'the hunt for the bracer' and cast locate object on level 2. The bracer was detected in the direction of Ramscorn. First they encountered the cilindrical room with the chest and screaming poison and everything. So the cleric and warrior strip down so they can descend. Once down they lasso the chest off the edge and check it out. Ravion goes 'oh oh' as they realise what is up on this level with the font of dreams.

Then the owlbear joins in. Crazed and running in it jumps down, taking a lot of falling damage, and starts flailing around. The party immediately reacts and chops it down with a vengenge and a well aimed crit from Summer. It still did a few solid hits though and was a wake up call.
( Collapse ) 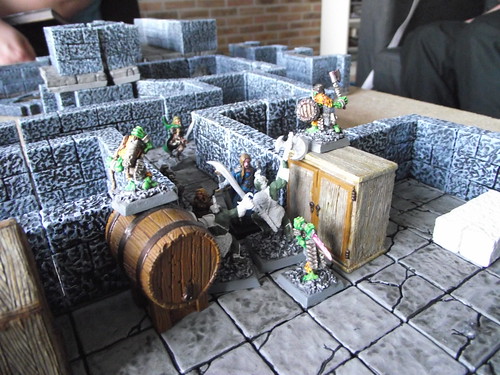 This session was a full days worth. We scheduled a day, because everyone wanted to play some more as soon as possible. The players were close to reaching character level 3 and they wanted to level badly. It even got to a point where after each encounter they would ask 'Did we ding yet?' and I'd reply 'Patience young padawans, I will hand out xp during the dinner break.'
( Collapse ) 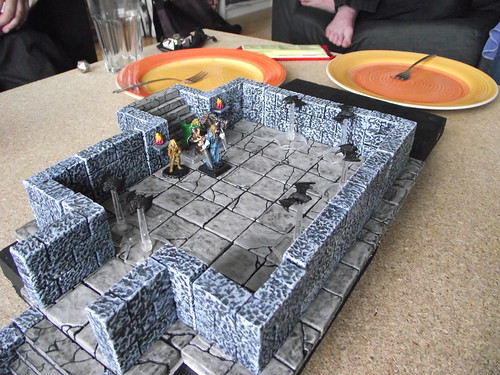 At this point they went to the room with the crumbling ceiling. They all sneaked through it, but some of them did get a bit of ceiling on their heads! Ha!

The moment they entered the room with the stairs to level 2 and they were asked the question of where the shadow lies they all replied at the same time 'between the light and the dark!' :) At this point they were really following the shadow map as well, thus they knew about the secret door as well. They left the level 2 stairs alone for now (thank god, I am still working on physrepping water for level 2)
( Collapse )

Group A session 12
Of elevator platforms, demons and zombies!! Brains!

With all the loot the party retreats to the study to divvy it all up. They manage to identify most of it correctly, though a botched spellcraft spell on a scroll makes Ravion think a scorching ray is actually a burning hands. Tough luck for him, ha!

They figure they want to fix that levitating disc puzzle first. So they head back to the room and put Ravion on top. He figures out to think what direction. He thinks up, I roll a scatter die, he flies in the north-west corner of the room. Oddly enough his player managed to figure out with logic what up and down would be if 'up' was north-west. I just nodded. He was spot on, but afterwards I told him that his logic was cool and all that, but derived from a random direction. ;)
( Collapse )

Good god forgot to post a lot. We are up to session 35 and I haven't even posted session 11! Here we go.

Group A session 11
The dwarf and the pittrap

Now that they have a floating disc going, they figure why not use it? So Summer is able to grab the ring by floating to the middle and back again. Ace!

They head back to Brindenford and get to Felstor to identify the ring. They also find out what the other items of magic are. Some nice loot, the rogue is magicicking up. The artifact goes to Summer (again), because 'she is less likely to craft anything and thus have the highest effective level to use the ring'. I figure whatever. :P She also purchases 3 pairs of gloves to hide the ring in town in all kinds of situations. "Strange? No, these are stylish." The party plans to stick it to the b-team sometime later. They go back to Brindenford.

They also manage to crack the serrestique's treasury room this session. Though before they did so it was kinda silly. First Summer and Kharzak go to the treasure door, they then realise they need the key. So Kharzak goes back, promptly falls down the pit (failing his spot check badly) grabs the key, goes back, falls in the pit AGAIN (natural 1 anyone?) and they unlock the door. They see the mosaique puzzle and figure they need Ravion to solve it. So Kharzak goes back (again) and leaves Summer alone, in the small connecting room, without the key. This time he doesn't fall down, but he does on his way back.

Ravion manages to reach the room, doesn't get the puzzle though. So they decide to bash the door down. Problem though is that Roa is outside, holding their rope. So they each try to bash open the door, and Summer (of all people) succeeds. "Solved the puzzle" the PCs even dare to remark.

They loot up, bypassing the traps. They didn't check for double bottoms though, so they miss the elixers of action. They all load it up on yet another floating disc and start heading back (they have endure elements on all at this point). Just as an encore Kharzak falls down the pit trap again.

They finally come back out to Roa (whose player has been standing around for quite some time now). It is at this point that Kharzak's player remembers that he can cast 4 level 1 spells, not 3, and that Roa could have joined them. Some grumbling was had.

We called it at this point due to the session taking quite long with all the puzzle solving. 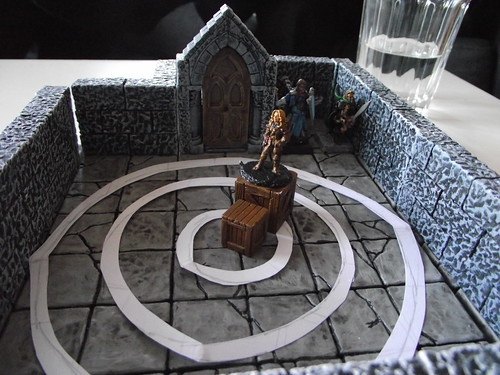 [The vault of the ring, the blizzard room entrance and Serrestique's vault]

The group sold most of their stuff in town and did some upgrading. They managed to get Felstor to 'store' their books in trade of him having access to them. Smart players.

They went back to find Chasmal. They did find him, but he started attacking them. Before that happened they all tried to reason with him, with low diplomacy scores. Just as they thought it was all over, the rogue rolls a natural 20 on the diplomacy check. They struck up a conversation and managed to get Chasmal to agree to meeting Dressa outside of Brindenford after the full moon has come and gone. Awesome.

Now they wanted to work on some of the 'treasure' rooms. The blizzard room was interesting. The cleric fell in the pit, but they worked with a rope pull system that worked. Seeing as I forgot the door to the room doesn't stay open, this worked. After an hour they managed to reach the other end, just to find a door and they didn't have the key with them. Ha!

At this point they were pretty paranoid about the B-team finding this ring they spoke of. So they decided to taunt them (again) by using chalk on the ground to draw a big arrow to the door to the blizzard room. "Ring this way" Yeah we laughed.

They figured lets try to get through the doors to to the ring of the vault. They managed to open the doors after much, much work. Several days were used to get this far. Then the door opens and they are sung to by a disembodied voice about making no noise at all.

The rogue figures 'I have this' and sneaks in, makes noise, and is promptly knocked unconcious by the resulting sonic damage. "Holy crap!" the mage screams. "Did you just yell in the room?" "No! No! I am outside!". Ha!

So he casts Tenser's floating disc and gets the rogue back outside the room where she is quickly healed up.

So much for this session, puzzle solving in the next!

Group A session 9: Curses, haunts and the B-team

[I misnumbered the dates a little on the last session report. So these are the correct in-game times. It should also be noted that my players looked up the next full moon, which is 4 days from 'now'. The Forgotten Realms has excellent resources for finding that out.]

After a few more tries Ravion steps towards the pegs and puts the black, grey and white on a row in the middle. The door slowly slides into the ground, allowing access to the bookcase.

Ravion and Roa busy themselves with checking out the books. They are mainly on subjects of the arcane arts and some on local history.

"Summer, check the backside of the case for me please. If she left her spellbook it might be around here." [Unfortunately Summer rolls a DC13 on her search and misses the spellbook compartment in the back of the bookcase.] 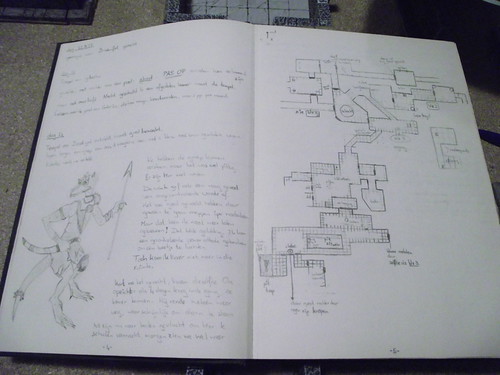 Bad news, I never did more then make a few notes on this journal (so far the only one). So, hey, here are the notes:

The heroes descend into Dragon's Delve once again, determined to find the personal quarters of this mage Serrestique. They pass the glass cilinder room, the shrine to the four mages, and take a left, deeper into the dungeon.

Summer sneaks ahead to check things out as she hears the soft sound of ticking on stone, and it is coming their way. "We got incoming."

Around the corner storms a scorpion the size of a small dog. It immediately starts attacking Roa's feet, to no avail. The party makes quick work of it.

As they move on they come to the corpse of a dead elf. Ravion determines it is in fact a dead moon elf. "Alas poor elf, lets loot him." Kharzak pipes in. They come off with some coin, a chain shirt and a masterwork rapier for their trouble.

"You know, when we gain access to it we should raise some of these corpses and see what story they can tell us." Ravion decides.

[This is the quick physrep I used, I know, I just didn't have anything better at hand.]
Collapse